Taking on a workbench restoration project is not as difficult as it sounds.  My father recently gave me my grandfather’s old carpenters bench, and wow had it seen better days.  My father and grandfather were both in the tool making trade, so this bench saw more oil than it ever did wood. 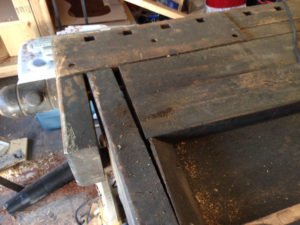 If you want to get a really good deal on a very old bench, you can find them online using resources like Craigslist.  There are a ton of people out there with very old historic benches that they do not know how to restore.

Many times these people are looking to clear out these old benches for a good deal, because they don’t see the value.  A good woodworker can appreciate an old carpenters bench.  The trick is being able to restore it to what it looked like a long time ago.

These are the only few shots I have of my grandfather’s bench.  I was so excited to get the process going that I did not take many pictures in the beginning.  The first step in any workbench restoration is to see what needs to be done.

In the case of my bench, the top was covered in oil, the glue joints in the boards were breaking apart, the bench was sagging forwards, there were dozens of nails hammered into the top, and there was no base at all.  Both vises were broken, but the boards were still in place.  I removed the vises before starting on the top, because I did not want to damage them further. 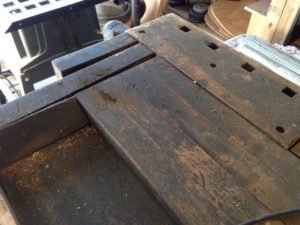 The first step was to remove the grease from the top.  For this, I used a grease remover for cars. It cuts grease like crazy, and removes it from the surface.  After wiping…and wiping…and wiping some more, I was able to remove most of the grease.  I went through a couple rolls of the blue shop towels doing this step.  I also bought a stiff bristle brush (like for cleaning a tub or sink) and used that to power through some of the really thick areas.  Once the overwhelming majority of the oil and grime was removed, I was able to take a look at the joints on the top.

Most of the boards were coming apart, and I was able to get a thin hacksaw blade in between them to cut out the dried glue and grime.  Several of the openings went end to end, and a few stopped about half way.  Once everything was cleared out, I was able to begin the process of gluing the top slats back together. 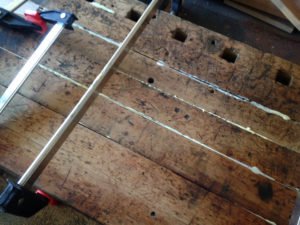 The trickiest part of this workbench restoration was gluing the top back together and keeping it level.  I cut some boards that I was able to screw to the bottom of the bench to line everything up for gluing.

I had to work quickly, because the spaces needed to be open for the glue to seep between the boards.  I filled the cracks with glue, then clamped the top together.  Next, I spent a little time bumping pieces into better alignment with a rubber mallet, and when I was close enough to happy I tightened my clamps and screwed in my support boards.  This was left to sit and dry for a few days, because there was a ton of glue.  When the clamps came off, the top stayed exactly as I glued it.

The key to workbench restoration is to keep on going when it seems like you are not making progress.  You are.  Just keep sanding or keep wiping and the surface will continue to improve. 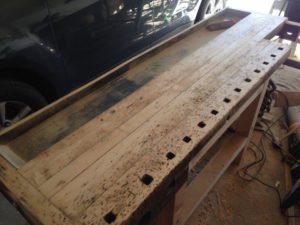 Now that the structure was in better shape, it was time to work on leveling out the top.  I used a belt sander with an 80 grit belt for the job. Working at a 45 degree angle to the grain, I allowed the belt sander to do the work.  Don’t push on the sander, as it removes material quickly.

It took a couple hours of sanding to get everything level, but it worked.  The last few passes with the sander were with the grain, then I switched to a 120 grit belt to remove the deep scratches left from the 80.  This was done with the grain, because the scratches are easier to remove and hide when they go in the same direction as the wood grain.  The next task was the nails.

I vaguely remember hammering nails into a bench in my grandfathers garage as a kid, so it was only fitting that I was stuck removing these myself.  For most, they were unable to be removed without digging into the top.  I used a nail set to send them below the surface, knowing I would be filling the voids later.

To see what that looked like, take a look at my article on Homemade Wood Filler, where I make a wood filler from sawdust and shellac.  The black holes that you see on the sanded surface all disappear after being treated and filled, and the bench takes on a more uniform color. In total, this workbench restoration took a few weeks, working about one day each week.

Now that the big part of the job was done, the sides and faces were next.  These were accomplished with a palm sander and 100 grit for the rough areas.  Finally, I went through finer and finer grits until getting a 220 grit finish.

Workbench restoration success depends a lot on what you are starting out with.  My bench was bad, but there are many I have seen that are worse.  A little shopping around never hurts, as you may find a better deal.

Once all the body work was wrapped up, it was time to fill the voids in the surface. Again, these were mine from when I was a kid.  After that, a Danish Oil

finish was applied, and a base was made from 4X4s’ to hold it at the right height.  I have a video from another article that explains How to Apply Danish Oil, and it makes the process simple.

Have you ever taken on a restoration project like this?  Please share it with us, and we can all learn some of the tricks. 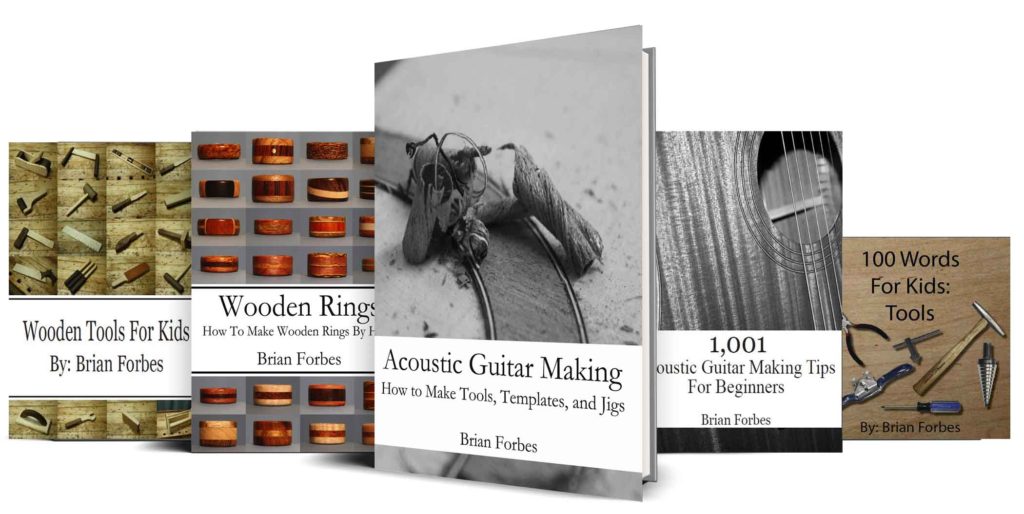